Today was our first full day in New Orleans and we were apprehensive because yesterday morning we saw on the news there was a tornado alert here and it had been raining a lot last night. We needn’t have worried, it turned into a beautifully hot day, demonstrated by the fact that I (Lucy) managed to get burned as usual.  The day started with a Southern breakfast at The Ruby Slipper (special mention to Lorraine and Laura here for their previous slipper related comments).  The breakfast consisted of bacon, fried green tomato (Glen didn’t like the tomato and I didn’t like the coating on it so I ate the tomato and Glen ate the coating lol), eggs over easy, grits (which amazingly it turns out I like (think porridge made with corn instead of oats) and a biscuit (it’s a scone :p).  So much food we didn’t bother with lunch today although we did stop at Cafe du Monde for beignets (fried donuts with half a tonne of icing sugar, yum), I wouldn’t wanna be their cleaner though, that’s all I’m saying 😉

So we tried to visit the hat shop which was closed despite what it says on the internet, boo to them. No Heisenberg for Glen then 🙁 Then we went to the voodoo museum, small but enjoyable. The lady in there was lovely and let me rest my weary feet from walking round the French district. Marie Laveau, basically the Queen of NOLAs voodoo was a beautiful looking lady it would seem and contrary to many people’s opinions of voodoo she was considered a healer, she was a practising Catholic, she adopted orphans, fed the hungry, took in the homeless (incidentally there are a lot of homeless and beggars here, it’s so sad to see but there are only so many people you can give money to 🙁 ), she also visited condemned prisoners and cured people during yellow fever epidemics. We might be going to see her tomb tomorrow.  Despite all that, all the bones and animals etc still makes voodoo seem a bit scary to me.

We wandered all around the French Quarter, trying pralines in one shop, these ones are made by dropping the mixture from a spoon so it’s kinda flat, they taste a bit like fudge or tablet with smoky pecans in. Yum but I couldn’t eat a lot.  We also made it to Jackson square where all the artists and musicians hang out so we browsed all the beautiful art (Glen and I couldn’t agree on one piece lol, he liked the freaky looking doll pictures and skulls and I liked a green female Buddha looking painting or angelic ones) but they definitely have something for everyone there. We sat down (or in my case jiggled about a lot) to listen to a band play for a while and watch people dancing. NOLA is a great place to people watch, such characters and a few drunks lying on the floor lol (they weren’t dead, I checked).  We sat overlooking the Mississippi river for a while too (huge and brown but rather beautiful in its own way if you ignore all the container boats lol).  We rode the street car back closer to home and are now giving my poor dead feet a rest before we head off out for our anniversary meal (and no doubt another club or two) tonight. Definitely taking a taxi tonight, my feet ain’t up to all this walking malarkey. Later gators. Xxx

Sat night we had a walk out down Frenchmen St, had a walk round the arts market and we have noticed that most sellers don’t like you taking photos.

As it started to drizzle with rain, this did not dampen the spirits of anyone, they just carried on as if it wasn’t happening, we then dropped by the Vaso Club and listened to some great live reggae bands,  the place was full of characters including Mr Hi Vis (man wearing a hi vis jacket) we guess he came straight from work, Ska Man (complete with fedora hat) Skullcap man, Rubber man, (way over 6 feet tall but only weighing 10 stone) Jack Sparrow showed up looking more like Adam, without his Ants and later on even Bill Bailey threw some shapes.

Tomorrow (Sun), we will be venturing further into the `Quarter` 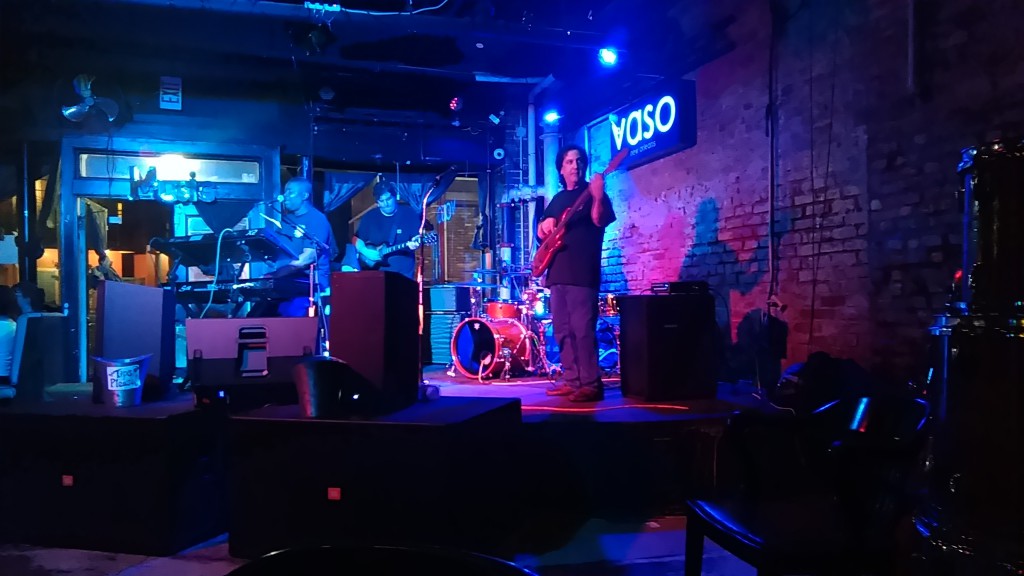